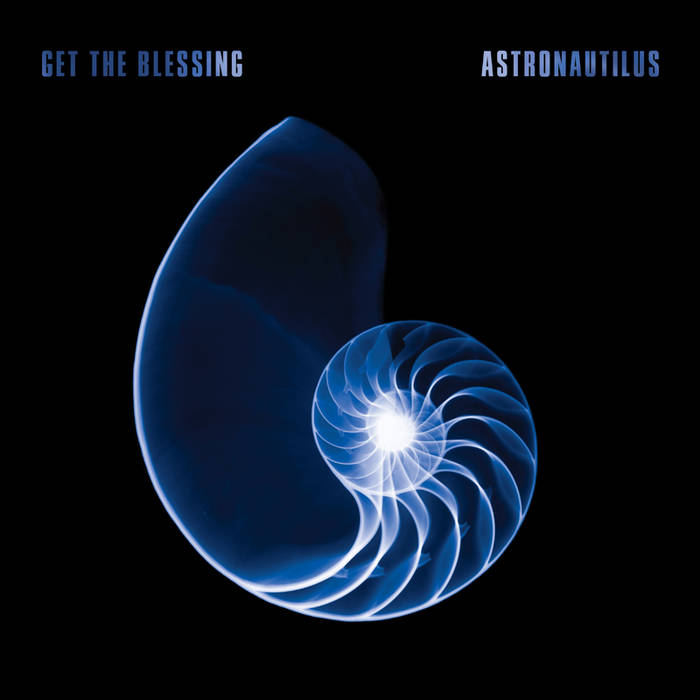 freejazzy Its always exiting what these guys put together. They succeeded in embedding what they've experienced since their last record and (attention, play on words) seasoned it with flavors of the Cornish Coast. Favorite track: Hayk.

Jason Bath It takes the great sound and vibe of previous Get the Blessing albums but goes a bit darker and edgier. Headphones on, crank the volume!

“Get The Blessing’s set moves back and forth between mellow to intense, but it’s never indulgent. What makes Get The Blessing such a formidable live act is that their music, no matter how obscure, never fails to entertain. The audience remain enthralled throughout, the accessibility of their music being the key.” - Drunken Werewolf

"Get the Blessing is back for its fifth album and the momentum of creativity is undipped." - BBC Music Magazine

Astronautilus is Get The Blessing's fifth album (and third for Naim) and comes blazing out of Bristol chasing the tail of its predecessor, 2014's Lope and Antilope. While Lope and Antilope saw the band dip their toe in mellower waters, Astronautilus was literally composed between crashing waves and deserted estuary sands, producing an album of pounding rhythms, spacious atmospheres and strongly-crafted melodies - plus, of course, the unpredictability and musical mischievousness that have made the band so exciting and successful.

Astronautilus has all the deep textures and open-sounding playing with electronics you would expect, but with a greater sense of structure and depth. On first listening it's darker and subtler, but further listening reveals it to be an exciting and focused album, or as the band put it, "dark with a joyous soul." With more adventurous improvisation and electronics coming into play, it seems a natural development and refinement of previous work. The mood of the improvisation has also coloured the more composed tunes, striking a perfect balance between the deliberate and the accidental.
Having enjoyed the process of taking themselves away from their normal environment to record the last album, Astronautilus was recorded while the band were holed up on a remote part of the Cornish coast, where the landscape and midnight beach rambles proved inspirational. It was on these walks that conversation turned to such matters as the stars and the sea, which in turn led to the titles - stars and fish, or puns on both.

The opener, 'Phaenomena,' is an improvised track, driven by Clive Deamer's afro-beat-esque drumming, and is a particular favourite of the band as it's so unlike anything they've done before. After this comes 'Carapace,' a beautifully arranged piece, incorporating vivid and exciting electronic improv, was recorded in one take, with no additions or overdubs. 'Monkfish' returns to early Blessing days, a riotous affair, simultaneously inspired by Thelonius Monk, a pair of Deamer's shoes and of course, the fish. 'Hayk' refers to the Armenian name for the constellation of Orion the hunter, and comprises a menacing, disjointed, Miles-esque start, followed by a warm, reflective, harmonically rich and quasi-euphoric ending. 'Cornish Native,' named after the oyster, was the unexpected pearl in the grit of editing. Recorded on the first day, it somehow got forgotten, only to be triumphantly resurrected at the eleventh hour.

Astronautilus is dedicated to the memory of Ornette Coleman, who passed away in June this year and who was pivotal to the band's formation in 2000. After fifteen years Get The Blessing can still lay claim to their original line up: Jake McMurchie sax and electronics; Pete Judge trumpet, flugel horn, piano and electronics; Clive Deamer drums and percussion and Jim Barr bass, electronics and organ. That they can still produce such creative and intelligent music - all balanced with wit and passion - as well as find time to work on other projects, is testament to the free spirit that they embody, not to mention their new cocktail, the Gin Garden.

Produced by Jim Barr and Get The Blessing
Recorded by Tim Allen and Jim Barr at Skylarks, Trebetherick, Cornwall, January 2015
Mixed by Jim Barr at J&J Studios, Bristol
Mastered by Shawn Joseph at Optimum Mastering, Bristol
Photography by Tom Barnes